Tonight is Taylor's senior prom! I know it's kind of early for prom season to begin, but then we are homeschoolers and homeschoolers march to their own beat. This, plus the fact that the prom is a also a fund-raiser for the Beta Club and they need the funds before the March state convention, makes for an early prom.

So, today I have been trying my hand at something new to me. Making a boutonniere and corsage. I was so happy that Taylor wanted me to use pink flowers, and I promise, I didn't try to persuade him in any way! Really! After dropping Taylor off to help with prom decorations yesterday, I went in search of materials. I found the perfect roses at a little shop not far from the prom site! There was also baby's breath and fern frond in the bouquet, so I didn't have to find filler. I was so happy!


This is one of the roses before I mutilated it. 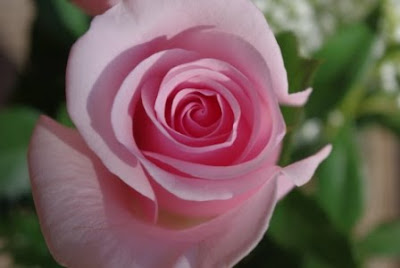 No kidding! You behead the flower and replace the stem with a florist wire. Everyone but me probably already knew this. I had no clue until watching seemingly hours of YouTube instructions on how to make corsages. So, off with the stems and on with the wires. Here's a rose after its stem transplant. 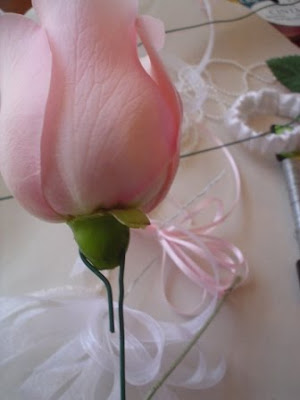 Here's the finished boutonniere after adding a fern frond, baby's breath, and wrapping the stem with florist tape. I was pretty proud of myself after this little feat. But now on to the BIG challenge...the corsage. 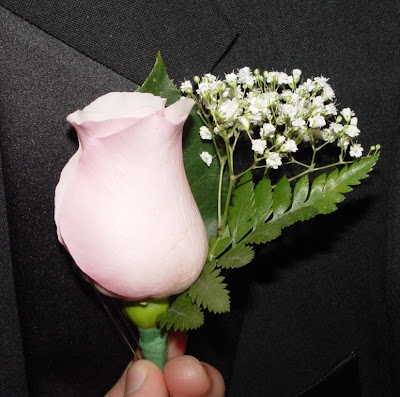 Now, I'm kind of out-of-touch with the florist world, so I didn't know wrist corsages are in and pin-on corsages are out. I found that out when I called a local florist to price corsages. Evidently I'm also out of touch with the price of flowers when bought from a florist. I was informed that a simple wrist corsage starts at $25! That's when this home-school mom decided to become a home-florist.

First I had to think about how to make the wristlet to hold the corsage. Ah-ha! Light bulb moment! I could make something like a pony tail holder from elastic and satiny material I already had!

To finish up the corsage I made three little flower clusters just like the boutonniere, arranged them together, and added the ribbon bow I had made last night. And, VOILA, the finished product. (It'll look better on a young girl's hand instead of my aged one.) 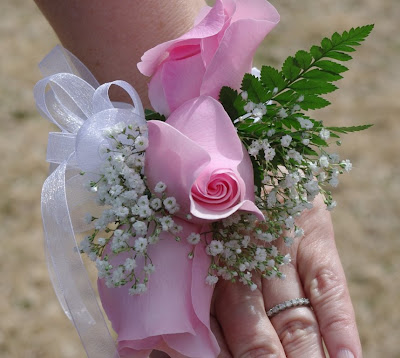 Hey, I was pretty impressed. Now, if they all hold together okay, we're in business. I'm sending along a corsage pin just in case the flowers decide to come off of the wristlet. Afterall, I am a seamstress, not a florist.

I was also happy with the total price for the two flowers... $3.99 for the flowers, and $1.75 for the ribbon. I already had the florist wire and tape from my paper-rose making days. So the grand total was less than $6! Not bad for prom flowers! And....

....there were even enough left-overs to make a small arrangement to grace our breakfast room table on this Pink Saturday! 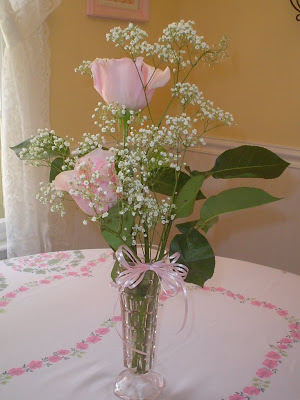 Be sure to go by Beverly's blog for a list of all the Pink Saturday participants for this week.
Edited to add: Taylor enjoyed the prom and he said his date had the prettiest flowers there. He's so sweet.


This post is linked to:  Making the World Cuter, The DIY Project Parade, Craft-O-Maniac Monday, Life Made Lovely Monday , Motivate Me Monday, It's So Very Cheri, Making Monday Marvelous, Craftastic Monday, Just Something I Whipped Up, Take a Look Tuesday