Do you believe in coincidences... 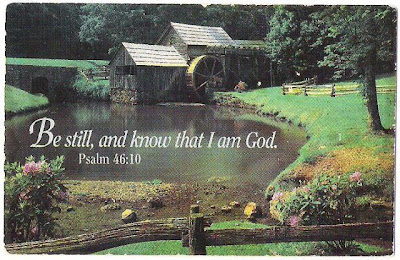 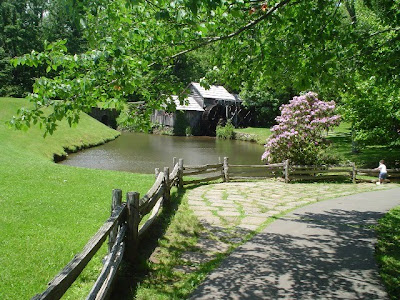 ...I don't. I believe everything happens for a reason. Thus, my awe of these two pictures. The first one is a little business card that has hung on my refrigerator since 1994. I know that, because of the calendar on the back. It was a business card from a local book store. I had no idea where the picture had been made, but I kept it and hung it on my frig because the beautiful scene and words spoke "peace" to my soul.

Fast forward twelve years...Neil and I took a trip to Mt. Airy, NC in 2006 to celebrate our 25th wedding anniversary. While staying there we took a day trip on the Blue Ridge Parkway and stopped at Mabry Mill in Virginia. While there, I snapped a few pictures of the beautiful scenery. Upon returning home, I had my pictures developed and the second picture, above, was among those. I thought it was so lovely that I grouped it with four other pictures in a collage-type picture frame and hung it at the end of our hallway. I would often stop and gaze at this picture while walking down the hall.

The picture had been hanging there three or four years when one day, while drinking in the beauty of it once again, it struck a familiar cord in me. It couldn't be! I ran to the kitchen, grabbed my little card off the refrigerator and carried it back to compare it to my picture. I couldn't believe it! It gave me chills. To think, that I had unknowingly traveled to the very place that was on that little card, and snapped my own picture of that peaceful scene. How awesome was that?

So, no, I don't believe in coincidences. I believe that I have a Heavenly Father that loves me so much that He carried me to the very place that had spoken peace to my soul for many years, and let me see it for myself. By the way, that very special picture is now our computer screen background...so that I'll never forget.
Posted by Sherry