Day 1: Back on Weight Watchers

Day 1 back on Weight Watchers is going well.  I made a 0-Point vegetable soup and decided to eat it for lunch instead of for supper like I first planned.  It would be too hard to eat vegetable soup while everyone else eats the hot meal that I cook!

So, I'll do like I did when I was on Weight Watchers before, eat what everyone else is eating for supper, but just make sure I'm eating the portion size to fit my Points allotment.  I think that's one reason I've kept off the extra pounds as long as I have (eight or more years), because WW taught me how to eat the foods I always eat but in smaller portions.  I think I've lost sight of those smaller portions lately so I'll go back to measuring and weighing until I relearn them.

I also need to incorporate the simpler way I've been cooking the last couple of years, soup or a casserole served with a side of raw veggies.  If the cooking becomes too time intensive, I know me, I'll just grab whatever's handy to eat.

I've found soups to be the best bang for my buck ~ or food for my points. So, tonight we're having chili.  The weather's a little warm right now for chili, but my tummy doesn't care.

Slow Cooker Chili
In a skillet, cook until meat is brown:

Stir well.  Cover and cook in slow cooker on low for 4-8 hours. Great served with a dollop of sour cream and grated cheddar cheese!  (If I only had that many points.)
I didn't get my menu made in time to put the chili in my slow cooker today, so I'll cook it up in my cast iron Dutch oven. 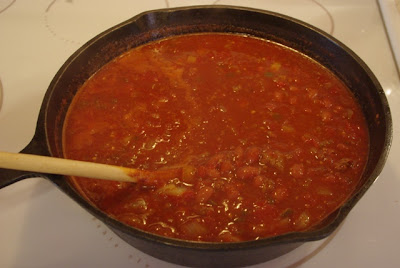