I'm so glad you dropped by to join me on my soap making day.  You can visit this post to find my simplified and printable instructions. (You might want to print the instructions out to follow along with while looking at the steps pictured below.) I promised a picture post the next time I made soap, so here it is!

First put on an apron that makes you happy because you'll have it on for several hours. 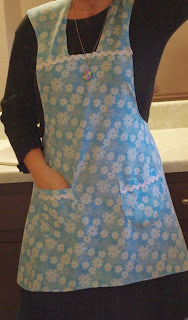 Now prepare your soap mold. You can simply line cardboard boxes with plastic wrap allowing the wrap to hang over on every side.  That's what I did the first couple of times I made soap.  Then my sweet hubby made me this mold out of scrap lumber.  It measures 28"  x 10"  x 3 1/2" deep. The mold is put together with screws which makes it much easier when it's time to get the soap out.  The night before my soap making day, Neil covers each piece of the mold with plastic wrap.  He pulls the plastic tight and tapes it on before screwing the mold back together.  In fact, he has it on so tight that it looks like glass.  This will assure wrinkle-free bars of soap.  My first two batches had wrinkles because I just lined cardboard boxes with the plastic, and believe me I was not the perfectionist Neil is.﻿ 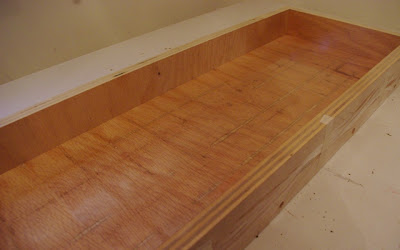 The next step is to gather your supplies. (Check your printed out recipe for the ingredients and needed supplies.)﻿ 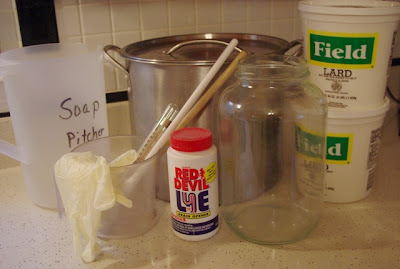 Don your long sleeves and rubber gloves.  Put 7 cups of cold water into the glass jug and carry it, a wooden spoon, a spoon rest, and the container of lye outside (because of the fumes).  Set it up in a place that is away from children and animals.  I don't have to worry about little Maggie (below) bothering mine.  She runs at the first hint of a chemical smell.  (I found that out the first time I went outside with nail polish remover. :)  However, I still put the jug on a high table out of her reach.﻿ 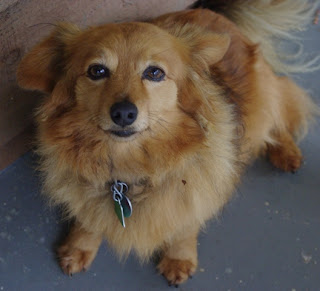 Using a wooden spoon, stir the water while slowly adding the lye.  Make sure you stir all the way to the bottom of the jug or the lye will clump there.  Stir until the lye is dissolved.﻿ Note: The chemical reaction causes the water to heat up to almost the boiling point when the two are combined! 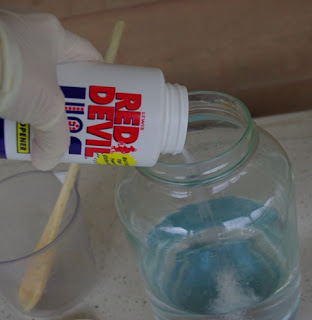 Now for the tricky part, the temperature of the lye water and melted lard need to be brought to between 96 and 98 degrees at the same time before combining the two.

I used an old-fashioned candy thermometer for my first batch of soap, but this is the type of thermometer I use now.  It's an instant-read type and is so much faster.  I have two, one for the lye water and one to use when testing the lard.  Neil had the bright idea to loop a stiff wire over the shank of the thermometer so it will hang over the rim of the jar.

At this point I hook the thermometer in place and cover the jug with a paper towel and rubber band (just to make sure no dust falls into it).﻿  I like to make my soap in cooler weather so that the lye will cool off faster, speeding up the soap making process considerably.  I run out and check the temp of the water and stir it every 15 minutes. The outdoor temperature at this time is 38 degrees and the water is cooling off 10 degrees every 15 minutes. 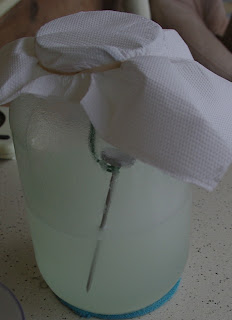 When the lye water is down to around 110 degrees I put the lard in the stainless steel pot on the stove and melt on low heat. (The lard will cool down much faster than the lye water.) ﻿ 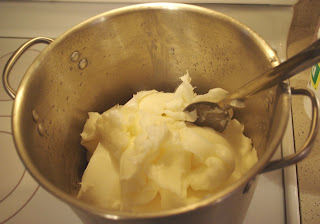 While the lard is melting I bring the lye water inside. The smelly fumes of the lye are almost gone now. The water is at the right temperature so I put the pot of lard into a sink of ice and water to speed up the cooling off process. 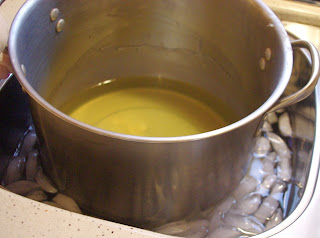 When the lye water and lard are both at the right temperatures I pour the water into a plastic pitcher. It's much easier (and safer) to pour the water from a handled pitcher than it is from a slippery glass jug. Carefully pour the lye mixture into the lard (pour in a steady stream) while stirring constantly with your wooden spoon. 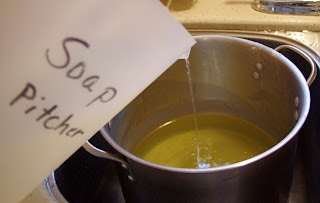 This is what the mixture looks like at this point.﻿ 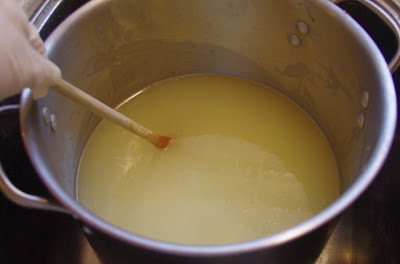 This is where you get to put your patience into practice.  Stir the mixture constantly for 15 minutes, then stir the soap every 15 minutes until it thickens and traces. Tracing is when you let a few drops of the soap fall from your spoon back into the pot and it stays on top a few seconds before sinking in (see picture below).  The mixture will be about the consistency of cake batter at this point.  It could take several hours to get there.  I stirred this particular batch at 15 minute intervals for 1 1/2 hours before it traced.  Each batch seems to be different though.  Don't pour your soap into the mold too early or it won't get firm! Don't ask me how I know that. :)  ﻿Essential oils may be added at this point if you want scented soap. 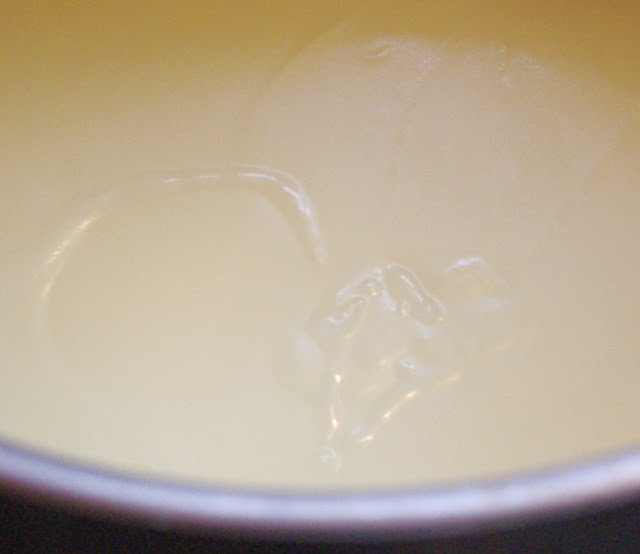 Now pour the soap into your prepared mold(s).﻿

Cover with cardboard and several towels.  (I also threw a rug over the top of the towels.﻿)  Leave until the next day. 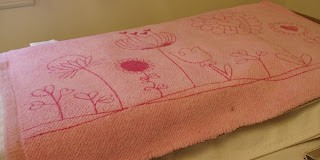 Now, go clean up that messy kitchen! Still wearing your rubber gloves, carefully wash all utensils in hot, soapy water.  I label all my soap making supplies and keep them only for that use because of the lye usage. 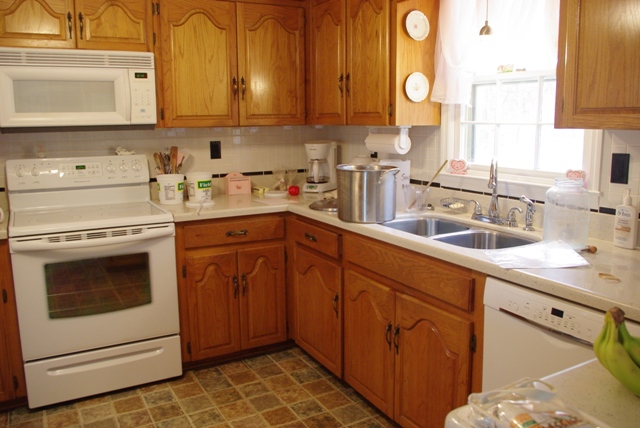 Soap may be hard enough to cut into bars in 24 hours.  If not, wait another day.  Unmold the soap. If you used a plastic wrapped cardboard box, lay a clean board or stiff piece of cardboard over the mold and flip over. (Make sure your soap is firm first though.)  Then remove the box and peel off the plastic.  Neil just removes the screws from my mold and takes the sides off leaving the bottom of the mold in place. 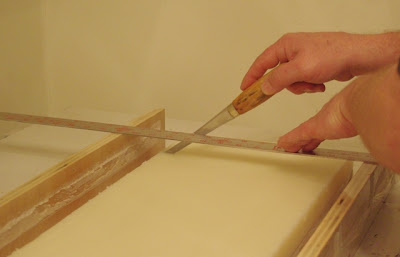 I leave the soap on its base until it's hardened, then I let it air-dry at least three weeks before using. 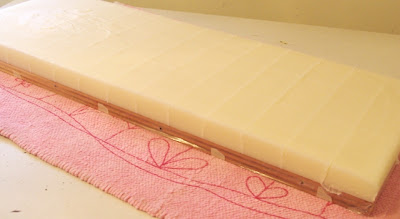 And there you have it!  Beautiful bars of pure white soap that are so very mild to your skin.﻿ 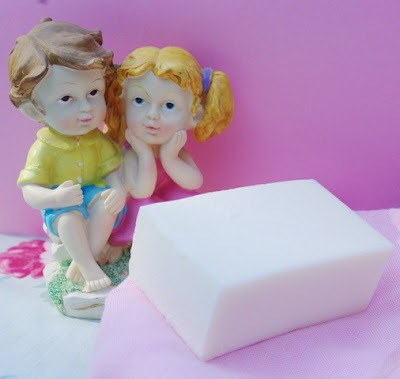 I know it sounds complicated, but it gets easier with each batch you make.  I'll be happy to answer any questions you might have about my soap making process.  Just leave them in the comment section and I'll get back with you soon.  Thanks for stopping by!  ~ Sherry
This post is linked to:  Show and Tell Friday, Frugal Friday, DIY Showoff, Life Made Lovely, Take-a-Look Tuesday