The title got your attention didn't it?
I hoped it would.

I've decided to get a little personal with my next few blog posts.

In my quest to do healthy things for my body, I've gradually moved toward using what some people call more natural or some might even call them somewhat Green products. I call them simple, homemade products more like my grandparents used.  It's been purely accidental.  I didn't set out to Go Green, I just love making things and found out that the things I make seem to be better for me than the stuff I buy at the store.  And they're usually a lot cheaper!


Bath Soap﻿
I think making my first batch of homemade lye soap some ten years ago started all of this.


I'm not sure now why I wanted to do it, but I'm so glad I did!
I've used my homemade soap for bathing pretty much exclusively since that first bar and my skin continues to thank me for it.   You can find my step-by-step soap-making instructions here.


Toothpaste﻿
Next, came a make-over with my toothpaste.  After hearing that too much fluoride could be bad for me and taking a look at the ingredients of my toothpaste (sodium lauryl sulfate, saccharin, artificial colors...really !?!), I searched and searched for recipes for a more natural toothpaste.  After experimenting with a few, I finally came up with my own simple solution: 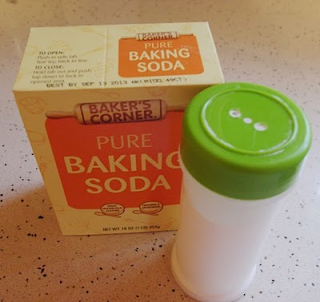 Here's how I use it:
Put pure baking soda in a clean spice bottle.  Punch holes in the top.  Sprinkle some in my hand, wet toothbrush, dip into baking soda and brush.  The rest of my family doesn't share my excitement over this simple toothpaste.  They think it tastes nasty, but after about a week I got used to it and now I can't stand the taste of toothpaste.  I've used toothpaste a couple of times when away from home and all the foaming now makes me kind of queasy.

Note: For people that think baking soda is too abrasive on teeth:  I've asked two dentists and several dental hygienists their opinions about using baking soda for brushing and they've all assured me it's very good for my teeth.  Oh and a bonus, after brushing this way my teeth feel like they were just cleaned at the dentist office.


Deodorant/Antiperspirant﻿
My next personal product to replace was my antiperspirant   I never thought I could give up my sweet-smelling roll on.  After all wasn't that what was keeping me sweet smelling??  But after hearing the scary stories about what possible bad effects aluminum (antiperspirant's active ingredient) could have on the body, I tried switching to a commercial deodorant instead.  But the one I tried wasn't very effective and wasn't natural which meant it still had quite a few chemicals that I wasn't crazy about rubbing under my arms.  So I started searching for a homemade replacement.  After trying several recipes, I became the happiest with a very simple one. It's basically made from two ingredients: baking soda and cornstarch.  You can find my instructions here. 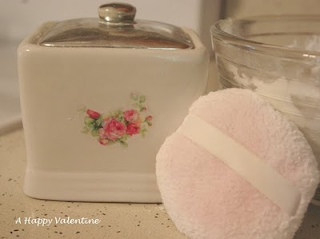 I must admit that there was an adjustment time involved.  During this time I would often (hopefully) discreetly sniff my underarms but didn't find a sweaty smell, just some natural wetness.  I didn't entirely trust my homemade version for the first year I used it though.  Meaning, I carried a bottle of store-bought roll-on antiperspirant with me if I was going away from home for more than one day, such as camping or to an amusement park.  I don't think I ever had to use that roll-on though.

I now dust on my homemade deodorant and boldly march out into the Alabama heat for whatever the day may bring.  I think the biggest test is after a day of gardening in the deep-south humidity, but after a quick sniff, I find it works at least as good as my old Secret.  I now prefer my homemade "secret".    BTW, I use the words antiperspirant/deodorant interchangeably when talking about my homemade version because it is a deodorant and under most circumstances an antiperspirant too.

Note:  This deodorant is also great to dust on any insect bites you might have.  It stops the itching almost immediately!  It's a temporary fix but feels good while it lasts.

Shampoo/C﻿onditioner
Now for the last frontier in my quest to replace my commercial personal cleaning products, I turn to shampoo. ( I've heard some really stinky reports about the toxicity of "regular" shampoos and conditioners to my body.)  I'm still in the experimental stage of this one.  I've tried a few homemade shampoo recipes, including a homemade super-fatted bar shampoo, but haven't been happy with the results.

I don't know what it is about my shampoo bottle, but I've held onto it with both hands...tightly!!!
But, finger by finger, I'm slowly letting go.  My first step was to switch from the daily use of my  lauryl sulfate-loaded shampoo to using a more "natural" commercial shampoo...every-other-wash.  So far, so good.  I was still shampooing every day, but only using the lauryl sulfate shampoo half of the time.

My next step was to skip a shampoo day here and there.  That was soooo hard for me!  I've shampooed and blow-dried my short hair daily for years and years.  I really didn't think I could skip a day and be presentable so I planned the off-shampoo days to coincide with my stay-at-home days.    Then came the next step: natural shampoo only...AND a BIGGY...skip TWO days of shampooing!  You know what?  My hair likes it!  Not only that, the second day of no-shampooing is now my best hair days!

My next step was to ditch the shampoos altogether and wash my hair with baking soda and follow with an apple cider vinegar rinse.  Uh-oh, back-up!  My hair ended up looking a little lot greasy from this combination. That was a few days ago.

Like I said, I'm still in the experimental stage with the shampoo but here's what I used today (which is the third day since my last shampoo!) and my hair looks better and feels very soft after today's washing.  I put about 2 teaspoons of baking soda in a 16 oz. squeeze-bottle (think catsup bottle), filled it the rest of the way up with warm shower water, wet my hair and squirted on about half of the contents of the bottle.  I then massaged this in just like I would with shampoo. Of course, there's no lather because there's no sulfates.  I rinsed that out and for good measure, squirted the rest of the contents on my head and massaged again paying special attention around my hairline ~ including behind my ears.  Then I rinsed, rinsed, rinsed.

Next, I have an old SoftSoap pump bottle in the shower that's half full of white vinegar.  I picked the bottle up and gave a couple of squirts of the vinegar into just the ends of my hair and worked it through.  I left this in my hair while I finished my shower and then rinsed it out.  (An added bonus: The run-off from these natural products during showering makes my whole body feel cleaner and softer.)

I blotted my hair dry with a towel after getting out of the shower then combed it with a large-toothed comb.  It felt great!  I let my hair air-dry for a while then gave my bangs a couple of squirts of my homemade hair-styling gel (a post for another day), and blow-dried just my bangs for lift. My hair is left feeling soft and healthy.

Here are a few pictures I went outside and snapped myself (not easy to do): 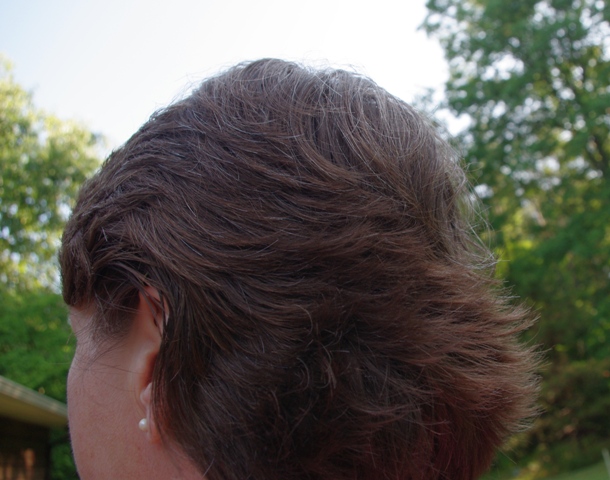 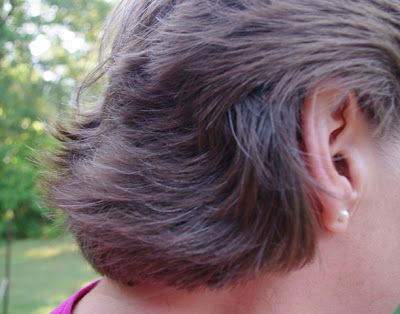 What surprises me most (well, besides all the gray hairs I see in these pictures) is the added wave my hair now has!  My hair has always been pretty much stick-straight with a few unruly twigs sticking out here and there.  But now I seem to have more of a wave going on!

So, the jury's still out on the shampoo deal.  I think I've still got a lot of experimenting to do, but I don't plan on going back to my lauryl sulfate shampoos.  And my "natural" shampoo also has a long list of ingredients with the second being sodium coco-sulfate. I'm not sure what that is and I would prefer ingredients that I could recognize.  So on with my quest!

I predict you are either interested or grossed-out by this post. :)  If you'd like to learn more about alternative ways to shampoo your hair, just Google "no poo."  (I kid you not, that's what it's called, and seems to be a new trend with lots of available information.)

I plan on several more posts of this type (maybe not as long as this one).  BUT, if this is not your cup of tea you might not want to read the others because I'm thinking about posts about my experiments with: homemade feminine-hygiene products, homemade cosmetics, natural health (hormone replacements), cooking from scratch, etc.

P.S.  If you have any expriences with your homemade self-care products you would like to share, feel free to leave comments here!


Post linked to:  Whatever You Want Wednesday
Posted by Sherry